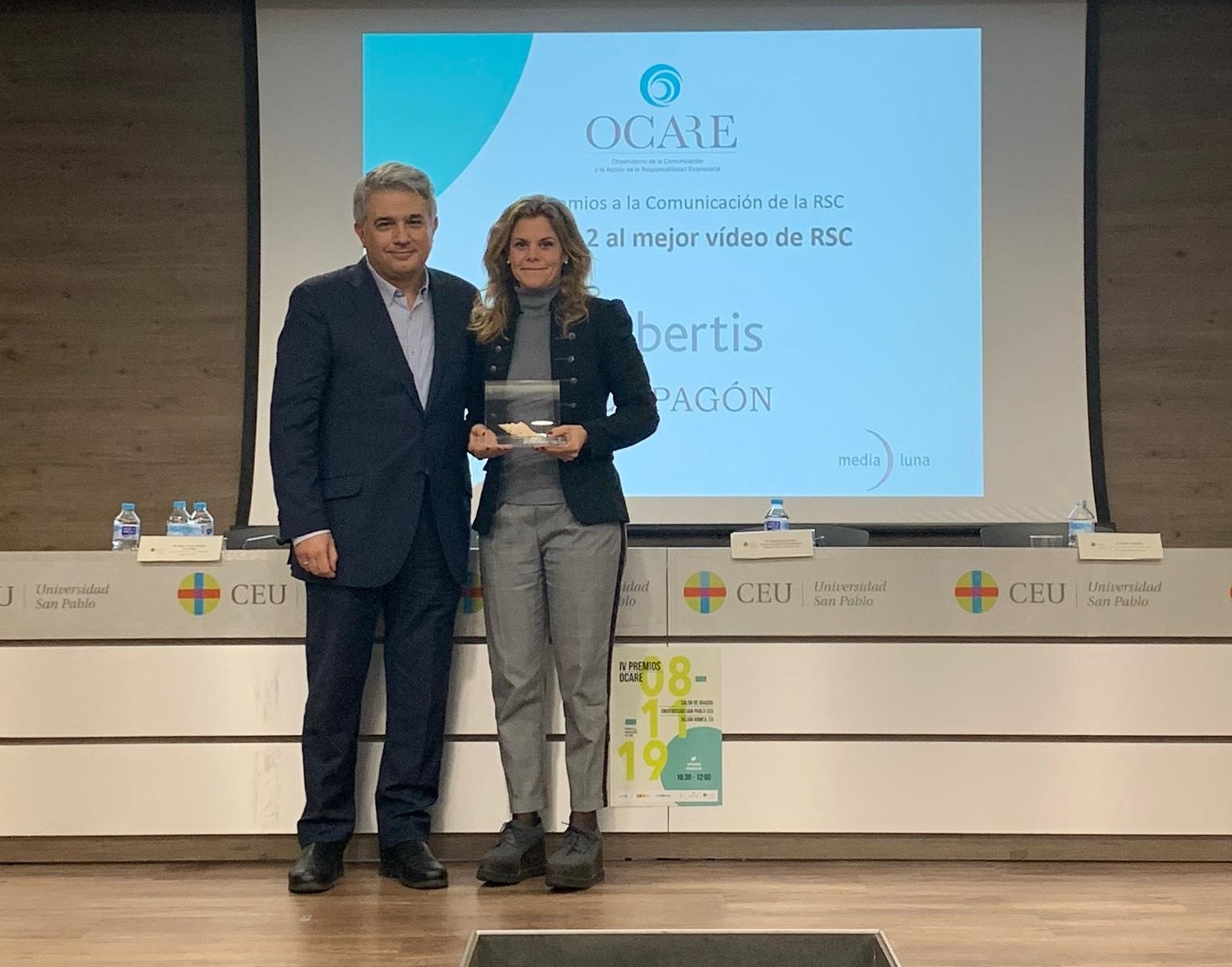 Multinationals, SMEs and the charity sector were the recipients of the 4th Awards of the Corporate Social Responsibility Communication and Action Observatory (OCARE)

Madrid, 11 November 2019. Last Friday, the Corporate Social Responsibility Communication and Action Observatory (OCARE) awarded its representative shells, symbol of intelligent, creative and powerful communication in the business world, to 12 organisations in recognition of their campaigns and communication actions in the field of Business and Corporate Social Responsibility, at an event enlivened by the Communication students of CEU San Pablo University. For the first time ever, there was a tie in one of the categories of the awards organised by OCARE, an initiative of the CEU San Pablo University and the consultant Medialuna, which was sponsored by ROVI Laboratories.

The winning campaigns were: “Do your best” by Calidad Pascual; “Sustainability seed plan” by Mahou San Miguel; “Where they are” by the Parliament Office in Spain; “Future Cities” by the Vía Célere Foundation; “Travelling together” by ING Spain and Portugal and “For a Love of Grooming technology use” by ORANGE ESPAGNE; “Our Experience” by Ferrer; “Quinton: A sea of conciliation” by Quinton Laboratories; “Second Chances” by Integra Foundation; “The Blackout” by Abertis Foundation; “Project #MaresCirculars (Circular Seas) to 45 Environment microinfluencers” by Coca Cola Spain and “Social Responsibility Health Network” by the Social Responsibility Health Network in Spain.

In the fourth call of the OCARE Awards, there were more entries than in previous editions. The jury of the OCARE Awards, made up of professionals and experts in Communication and CSR, has highlighted the quality and diversity of the initiatives received in this edition, as well as the profiles of companies and organisations, both from the point of view of the sectors of activity as well as their size, since the candidates include multinationals, small and medium enterprises, and NGOs.

Both in the winning campaigns and, in general, all the entries received, the care in selecting the target audiences and messages, the creativity and the use of new technologies in communicating and disseminating CSR initiatives stand out. Likewise, the desire to create continuity and the integration of Social Responsibility and its communication in the structures and strategies of the organisations stood out in this edition, increasingly taking care of their way of relating to society at large and, in particular, their environments and influential audiences.

OCARE was created in order to encourage companies and institutions to communicate their CSR more and better and, in this way, “inspire and convince everyone that business ethics is not only necessary but also profitable in terms of reputation,” explains Mercedes Pescador, founder of Medialuna, the consultant that established the Observatory with the CEU San Pablo University.

“Do your best” by  Calidad Pascual

“Where they  are” by the Parliament Office in Spain

“Travelling  together” by ING Spain and Portugal

“For a Love of Grooming technology use” by ORANGE ESPAGNE

“Our Experience” by Ferrer

“Quinton: A sea of conciliation”, by  Quinton Laboratories

Second prize for the best creativity:

Second prize for the best video:

“The Blackout”  by Abertis Foundation

Second prize for the best dialogue and listening  system: