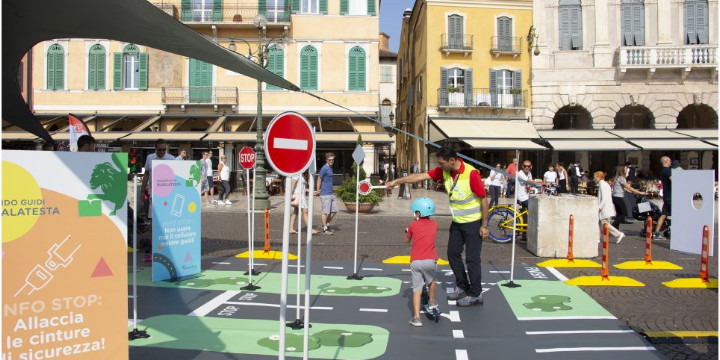 The Abertis Group, through its subsidiaries and the Abertis Foundation, joins the celebration of the European Mobility Week (EMW) by organizing several actions to raise awareness and promote road safety. The company reinforces this way its commitment to a sustainable, safe and innovative mobility.

The Abertis Group, through its subsidiaries and the Abertis Foundation, joins the celebration of the European Mobility Week (EMW) by organizing several actions to raise awareness and promote road safety. The company reinforces this way its commitment to a sustainable, safe and innovative mobility.

This weekend, the Abertis Foundation has carried out “El Apagón”, a shocking action to prevent the consumption of alcohol, drugs and other bad before driving at night. Nightclubs in Madrid, Barcelona and Valencia turned off the music in the middle of the dancehall to show a testimonial video, in which a young man tells from prison his experience of driving drunk and the tragic consequences of the accident (his friend died and he was seriously wounded).

In Italy, the subsidiary A4 Holding has launched this weekend Isola sicura (“Safe Island”), an educational project dedicated to road safety for school-age children, as part of the international festival of street games Tocatì (“It’s your turn”) in the city of Verona.

Safe Island replicates the street with signs, lanes, pedestrian crossings and roundabouts, where children can ride a bicycle or a skateboard, accompanied by tutors who teach them the rules of the basis of road safety: why it is important to fasten the belt, which are the consequences of using the mobile phone while driving and exceeding the speed limits, etc.

At the end of the tour, the “little drivers” who prove that they have correctly followed the rules will receive a “responsible driver” card.

The idea of the company is to continue taking this circuit for children to the service areas of the Group, as already the subsidiary of Abertis in Spain, Autopistas, made in 2017 with its program “Adventure on the toll road.”

Signalling for prevention in Spain

In Spain, the subsidiary of Abertis, Autopistas, will issue messages through the variable messaging panels installed on its toll road network to reinforce the ideas of the European Mobility Week. The company has also adhered the Edward project, an initiative promoted by TISPOL (European network of traffic police) to get safer roads in Europe.

Also, in the coming days, Autopistas will present the results of the second Observatory on the users’ behaviour in the toll road network, and will launch a road safety campaign based on the results of this study.

The project #RightsOfWay, to New York

Next week, in the context of the celebration of the UN’s General Assembly, Abertis and Unicef will present in New York the latest news of the global alliance that both entities maintain to combat the main cause of death in school-age children: road accidents.

On Monday 24, Abertis will take part in the launch of the Young People’s Agenda, an initiative of the United Nations to improve the lives of adolescents, while on Tuesday 25 will be a presentation at the Cervantes Institute in New York, with senior representatives of Unicef, the Embassy of Spain and the Spanish Ministry of Foreign Affairs, among others.

The #RightsOfWay project, developed by Abertis in the framework of its partnership with Unicef, incorporates a new area of collaboration with the Guttmann Institute, a hospital specialized in medical-surgical treatment and the integral rehabilitation of people with spinal cord injury, acquired brain damage or another disability of neurological origin. Within this program, specialized medical teams of the Guttmann Institute will travel to Jamaica and the Philippines to carry out training sessions and to advice local doctors on best practices applied to the prevention and treatment of injuries resulting from traffic accidents.

Next Wednesday, September 19, Abertis will announce the winner of the XV Abertis Award for Research in Transportation Infrastructures Management and Road Safety, which is delivered through its Abertis Chair in collaboration with the Polytechnic University of Madrid.

On September 4, the Abertis- Pontificia Universidad Católica Chair in Chile awarded its national Abertis Prize, which fell under the project “Ownership Strategies and Capital of Family Mobility in Fragmented Neighbourhoods. The case of the South Access Highway of Santiago de Chile”. The objective of the Abertis Chairs’ network is to promote training, research and the exchange of knowledge between the university and the company. Currently, the network includes five of the best universities in Spain, France, Brazil, Chile and Puerto Rico. Each Chair awards its national Abertis Award yearly, and among the winners, the Abertis International Award is obtained.

Although the Mobility Week is a European-wide project, September is the month of road safety also for Arteris, Abertis’ subsidiary in Brazil. The company holds every September the Arteris Forum. Its 5th edition took place on September 11 in São Paulo, and revolved around smart roads and their role in sustainable mobility.

More than 20 international experts took part in the meeting, including representatives of public and private sectors, as well as personalities such as Lucas di Grassi, Formula E driver and former Formula 1 driver, who offered an innovative vision of electric cars.

The event also had the participation of traffic ambassadors, participants of the 3rd Youth Forum, an initiative promoted by Arteris to prepare young people to promote change in the mobility of the future.

This action joins the similar forums already organized this year by Abertis in Spain, France, Argentina and Chile, and a forthcoming forum that will be held in Puerto Rico. The objective is to continue searching for solutions and allies and delving into the debate to promote road safety in the countries where the company operates.